Since I've moved to New York City, I've encountered many talented artists and designers; in fact, most of my good friends in this city are engaged in the creative industry in one way or another. It's led to an interesting phenomenon that hadn't occurred prior to my relocation; the in-person invitation to Depthcore.

One of the first of these invitations was extended to Nate Coonrod. Originally from California, Nate too relocated to New York in 2009 to start working for Wieden & Kennedy. His smooth illustration, simultaneously highly polished yet slightly punk and rough around the edges, has translated in to some excellent campaigns for Nokia, X-games and more.

Nate and I become fast friends, embarking on many ridiculous nights out, getting matching tattoos, and eventually agreeing he would have to join Depthcore. Keeping in line with the golden "better personal friends we are, the worse Depthcore member you will be" rule (as established by Erik Finsrud, who also has aforementioned tattoo), it took dozens of nasty instant messages and tweets to get Nate's first piece out of him - a week after the deadline passed. Let's chat with him briefly and discuss the making of his new piece, his former career as a skateboarder, and whatever else comes to mind.

Justin Maller: What's up Nate? Good to finally have you in the crew. Let's talk for a minute; how did you wind up as a designer in NYC after starting out as a pro skater in California? 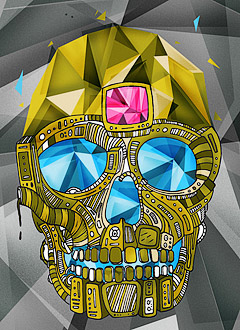 Nate Coonrod: Yo! I was never actually pro, but I did get some free shit that essentially made living the life of a traveling vagrant skate rat a little easier. I was working at a design studio in Long Beach, CA and I started talking with one of the creative directors at W+K NY. They flew me out for an interview and then I moved here two weeks later. Been here ever since. It was a good jump, it's ridiculous how many creatives reside here, and it's awesome not owning a car.

Justin Maller: Having a car in this city is a pain in the ass, I can vouch for that. So what are your first impressions of the collective? Did you enjoy building your first piece with us?

Nate Coonrod: I knew a good amount of the artists through their work before I ever saw the collective itself, and when I saw some of the guys involved, I was super impressed by the quality and abundance of work that everyone put out. It's great being able to interact with so many talented heads in a tight knit community who otherwise wouldn't have regular contact creatively.

The first piece I did was challenging, I tried some new techniques and I was sort of figuring things out as I went, but it yielded an interesting outcome that's different from most of the work that I put out. I think that continuing to produce depthcore works gives me the opportunity to try out a bunch of weird shit that I normally wouldn't do for client work.

Then the Depthcore community can tell me if it's awesome or if it's a piece of shit. It's nerve wracking having a bunch of peers of such high caliber critiquing your work.

Justin Maller: Ah, you're being a sook. Your workshop was really well received - it was definitely interesting to follow. I think we'll do a proper workshop article on it next week, but run us through the piece and it's creation quickly now.

Nate Coonrod: I started with a bunch of retarded sketches, and pictures of small things making larger things. Then did a base skull outline to overlay all of the random old computer tech stuff that it was going to be made out of. I use layers of tracing paper a lot with my work, which works well because half the shit I draw looks like it was made by a 12 year old with ADD and I can always scrap it.

After the initial sketch I'd do a new layer with micron pens then scan that bad boy into the computer and start coloring. I actually hated the original forehead of the skull that I drew so I scrapped it and illustrated a new one made out of weird polygons. Throughout the piece I just wanted to start with detailed hand drawings and end on the computer, with intentions of that process leading back to the original concept of Obsolete.

Justin Maller: Before I let you go, why don't you tell the good people the story behind that profile picture...

Nate Coonrod: A group of friends and I recreated a music video by Rad Omen for Halloween. And I was voted as Jack. That picture pretty much captures the pinnacle of the evening when I was hanging out with some cotton candy....