A Song of Madness
© Radu Pop 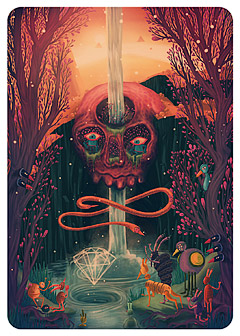 The Depthcore Collective is delighted to release it's 44th Chapter, "ECHOES". Featuring work themed around the concept of reflected sound, thought and memory, "ECHOES" is a diverse collection of artwork produced by members old and new over the course of the last eight months.

This Chapter embodies it's theme in several interesting ways. We've had a great showing from old members, artists who have been releasing with us for years and years. This is juxtaposed with more work from new members (and more new members) than any Chapter in recent history, including some members who got their start in digital art after seeing our early exhibitions. We're seeing styles that take the aesthetics of yesterday and present today's phase of it's evolution, as well as work that directly references aesthetic touchstones from our past sitting next to work created in a style never before present in a Depthcore Chapter; echoes converging that mirror the old and then move on to create the new.

Whilst perusing the Chapter in preparation for writing this article, it occurred to me that this may well be the first Chapter where traditional art outweighs digital. We've worked hard to create a balanced aesthetic within the collective, but it seems that in analysing our memories and delving into our past to create this exhibition, many of our members are reverting to their creative point of origin. There are also more series of work in this Chapter than ever before - quite appropriate when one considers the "Echoes" theme.

It's all in your head
© Lucas de Alcântara 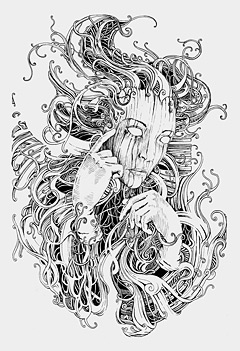 These two observation segue nicely in to announcing Lucas de Alcântara as our Featured Artist. Lucas created an amazing body of work exploring several core concepts, whilst focussing on developing his ability to use watercolour within the context of his personal style. The results impressed the rest of us to no end, providing a lot of inspiration and motivation during our slow build up in producing this Chapter. See his fascinating answers to my mundane questions in this Featured Artist interview - definitely a great read!

This Chapter sees the debut of many new artists, many of whom settled right in and made themselves right at home in Depthcore's artist portal - bringing in some awesome new blood invigorated us one and all, a big contributing factor to this being one of our biggest Chapter's in years. "ECHOES" sees debut pieces from Diego L. Rodriguez, Taylor Crisdale, Emory Allen, Josh Rhodes, Peter Olschinsky and Dean Cook as well as the return of existing members Jared Nickerson and Jonas Strandberg-Ringh. It's a great feeling to have the family grow, and we're delighted with their contributions to "ECHOES".

We hope you enjoy perusing the Chapter - sit tight, there's going to be a deluge of Rich Content from us, including workshops, wallpapers, Radio Shows and more! Hit us up on Twitter or Facebook and let us know what you thought of "Echoes" - we would love to hear from you.

Back to News & Updates