Doing good, just woke up, and right now besides the obviousm, i am contemplating whether or not to go to Denny's for breakfast with my family

eh, im not bad. its one in the morning, i figure i'll interview you then work on some tracks/pics for dC :) 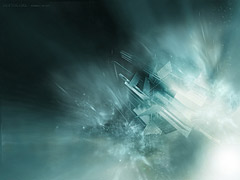 how and when did you make your start in abstract?

well, it all started when i was into music creation on the computer, i needed something to play it on, used winamp, then i looked through different skins and wanted to make my own

first i used Adobe Photodeluxe, and then wanted Photoshop, which a friend had...mad balln props to him

how ironic! skinning has never been my bag either. what are the tools of your trade?

well, i originally started with photoshop, then i recieved 3ds max, and only now i'm i starting to use that for whats its for

mostly, i started out using some tutorials, but i was hoping they'd teach my all the abstract i saw on gmunk, weworkforthem and such, so they were quickly abandoned

i think i learned to make a tentacle from tutorials :)

still haven't read that one myself :).... what do you forsee in the future for depthCORE? 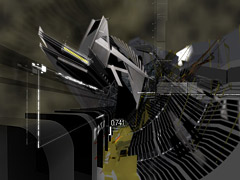 anyways, where do you see YOUR art going?

currently, i'm experimenting in motion graphics, and spending more time in my 3d models, and i'm in the process of making some commercial and personal sites

who would you like to spend a day as?

you're after the groupies? :)

more the day of coming up with songs from his/her head and writing them down, then they're mine :)

dishonest, but this isn't gonna happen

lol.... dodgy bastard... i'd at least be in it for groupies... anyway who is your ideal collab partner?

i watch my "Toy Story" behind the scenes

me and cubadust have a collab to finish

dstrukt if he still remembers :)

fair enough. whats your favourite piece you've seen released with depthCORE so far? (not neccessarily your own)?

probably weirdone's piece from the first release, or some of the skins by siron

well gav, thanks a lot for chatting with us, its been a pleasure

i've been wondering if william shatner is double jointed, e-mail your thoughts somewhere

Back to Top   \   Back to Interview List   \   View Chapter IV: Nemesis Submissions   \   Submissions by Gavin McGinn